My son turned 5 on January 2nd. (I can't believe my baby starts kindergarten this fall). He is hooked on everything Star Wars so it was no surprise when he wanted a Star Wars birthday party. His birthday is about a week after Christmas so after all of the Christmas festivities and family celebrations (which finally wrapped up on New Year's Day), I was in no mood to plan a birthday party. But I knew I couldn't let him down and after some inspiration found on the internet and Pinterest, I got to work.

I knew I didn't have time/didn't want to make everything. I purchased cups, plates, treat bags, invitations and thank you cards at Target. We only had a total of 6 kids at the party so it wasn't too expensive to buy these items.

Food:
The party was over lunch time, so I ordered pizza from Dominos.  (I love their on-line ordering.  I was able to order the pizzas before they even opened, request my delivery time, and track the status of my order.)

I didn't want to make a cake, so I just ordered the cake from the grocery store. 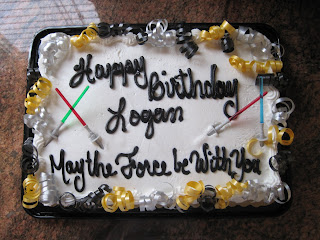 Favors:
I made each of the kids a Jedi robe using these instructions. I used fleece which I got a great deal on ($2.99 a yard), and since fleece doesn't fray they didn't need hemmed--a huge time-saver when you're making 6 Jedi robes. They were a huge hit and totally worth the time and money. 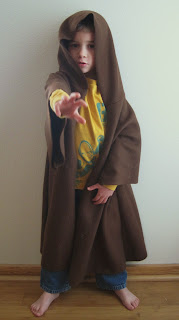 My husband made light sabers using foam pipe insulation from Home Depot and green and gray duct tape (idea found here). These were also a little time-consuming to make, but the kids loved them. (Even though they're foam it can still hurt if someone gets whacked in the face so I recommend adult supervision during any light saber battles.)

For treat bag fillers, I happened to find some Star Wars-themed treat in the Christmas clearance at WalMart. Marshmallow Yoda pops were 25 cents each and Star Wars candy canes were 25 cents a box. I also found some Kroger brand Star Wars fruit snacks at the grocery store.

Activities:
I purchased MP3s of three Star Wars songs from Amazon (the only 3 I recognized), downloaded them, and repeatedly burned them to a CD so I had 60 minutes worth of  Star Wars music to play in the background during the party.

One of the ideas I found on the internet was making a "death star" pinata by purchasing a soccer ball pinata at Hobby Lobby and spray painting it silver (idea found here). I bought a huge bag of candy for about $6 to fill it up. I forgot to take a "before" photo but here's the "after"-- 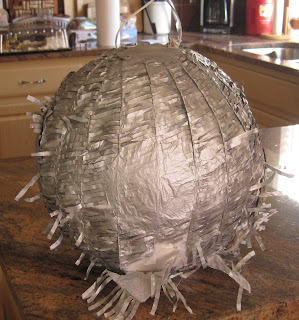 I stuck a broom handle through the plastic hanger and held it up while my friend supervised the kids as they smacked it with a plastic bat. It held up pretty well so everybody got a few turns and lots of fun was had by all.

I blew up some balloons and the kids had to "use the force" to try and keep the balloons in the air using their light sabers. They really enjoyed this activity.

We played pin the explosion on the death star. The "death star" was a circle cut from cardboard and covered in aluminum foil. I cut out 6 "explosions" from orange cardstock and wrote a name on each one.  After that it's pretty much pin the tail on the donkey except you try place your explosion in the middle of the death star. 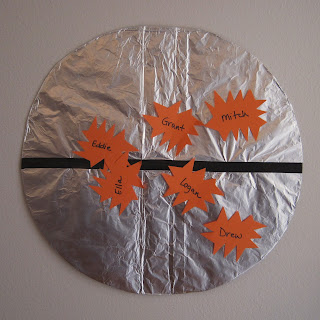 I even got into the whole Star Wars theme. Really awesome moms find a sock bun tutorial on You Tube and dress up as Princess Leia. 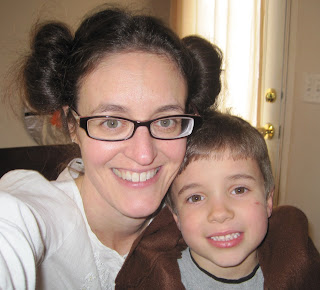