I love Goodwill. I love men's dress shirts. I love buying men's dress shirts for 99 cents at Goodwill and using the fabric to make all sorts of awesome stuff. The current project is summer shorts for my 4-year-old son. 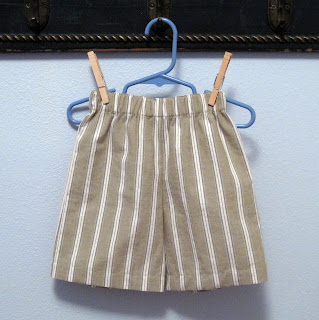 While "researching" the internet for new ideas, I found this great shorts tutorial at Saltwater Kids. While I've done the shirts-to-shorts repurposing before, I really liked the idea of using the pocket from the shirt as a back pocket on the shorts. Because I messed up my pattern placement on the first try I had to remove the pocket, move it down two inches, and resew it on. Before moving it, the top of the pocket barely cleared the waistband. After fixing the pocket, it looked much better. . . 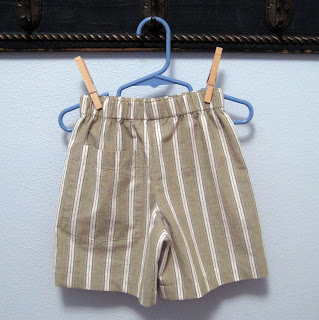 The tutorial shows you how to make a pattern using an existing pair of shorts. I used a purchased pattern (Simplicity 2627) because it was cheap and easy and I'm all about cheap and easy. I've continued using the same pattern for a few years now that I finally found one I like. The first summer I made shorts for my son the poor kid ending up wearing what turned out to be toddler boy daisy dukes because I made the mistake of borrowing one of my mom's "vintage" patterns from the 1970s. Apparently boys' shorts were a lot shorter and more fitted back in the 70s. Fortunately, these homemade shorts aren't nearly as embarrassing. Now to get to work on reconstructing this growing stack of shirts . 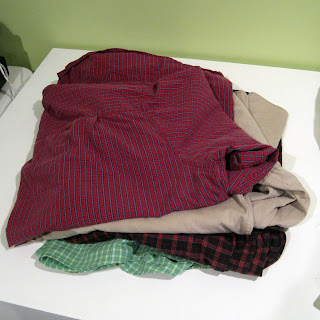