As a mom, the hardest thing for me to come to terms with was the fact that I was never going to accomplish everything (or sometimes anything) I wanted to in a day.  Now that my son is three years old, it is much easier.  I still don't get much stuff done, but we do have a lot of fun.  Since my husband was working his weekend of two 12-hour shifts, it was pretty much a Mom & Son weekend, and we made the most of it.  Saturday morning we were at Boingz bright and early for some bouncing, climbing, and sliding. 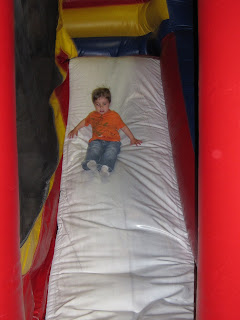 Then we were off to pick up Grandma for some shopping at the The Whistle Stop Country Store in Elkhorn.  It was such a cute little store with so many treasures to look at.  I loved all of their rescued furniture--if only I had more room in my house!  After that, we went out to luch with Grandma and Papa then came home to start weeding the garden.

We also got an early start on Sunday and went to the Henry Doorly Zoo.  It's not as crowded if you go early in the day.  Our big adventure was riding the Skyfari.  I was a little worried my son (or I) would get freaked out once we got on, but it was so much fun! 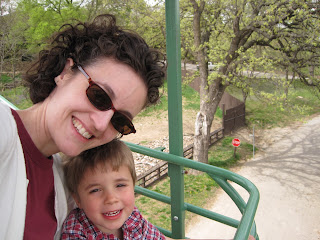 So the house is still a mess, and I have to go back to work tomorrow, but who cares?
Email ThisBlogThis!Share to TwitterShare to FacebookShare to Pinterest