If you're interested in joining my i spy fabric charm swap go here.
* * *
I figured my son wouldn't get to make a Valentine's box until next year when he was in kindergarten so I was pretty excited when he brought home a note from daycare stating we should make a Valentine's box at home to bring to school for the party.  I have fond grade school memories of making my Valentine's box every year.  My son and I decided a monster box was a good idea and I had visions of a cute little Valentine's monster with hearts and other such stuff.  His box: 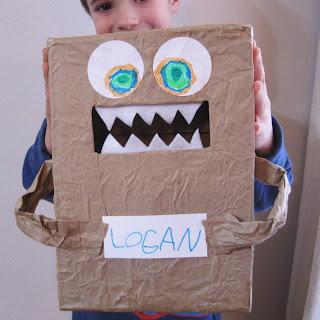 In case you can't tell, it's a rancor from Star Wars.  You know. . .the monster in the dungeon of Jabba the Hutt's palace.  (Because it's all about Star Wars at our house.)  Not what I had in mind but we had a ton of fun making it and he was pretty proud of his creation!
Email ThisBlogThis!Share to TwitterShare to FacebookShare to Pinterest