I've been wanting to make a crayon wallet for my son.  A few years ago I made him a crayon roll that holds 16 crayons.  I thought that would be a good thing to have in the church bag to keep him occupied.  I was wrong, and I realized this the first time we took it to church and he unfurled his incredibly long crayon roll and started whipping it around by the ties.  Bad idea.  I figure a wallet would be better to take to church because it only holds 8 crayons and has a pocket for some paper.  I knew I could come up with some type of pattern on my own but when I started factoring in the time that would take and the supplies used/wasted on prototypes that weren't quite right I decided to purchase a pattern.  I purchased a Crayon Wallet PDF Pattern from Vintage Market on Etsy.  It was a total bargain at $4 and was well-written and easy to follow.  I think it took me less than 30 minutes to make this-- 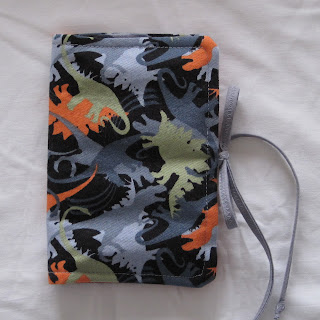 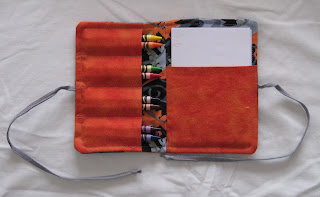 The dinosaur fabric was a remnant I picked up at JoAnn's.  I had the orange fabric in my stash and used some gray fabric and my bias tape maker to make the ties.  Instead of a notepad, I cut down office paper scraps to put in the pocket.  Thanks for stopping by!
Email ThisBlogThis!Share to TwitterShare to FacebookShare to Pinterest