I don't do much decorating for Halloween. (I don't do much decorating for any holiday, though, since whatever decorations go up always have to come back down.) I do like using stuff that would otherwise be thrown away to make other stuff. Several months ago I dug some wood out of our trash that my husband had thrown away (leftover oak veneer from the basement bar he built). I had him cut it into several smaller pieces so I could paint them with chalkboard paint and make cute little labels. And like most other project ideas, they've been sitting in the garage untouched. After being inspired by these spooky soap dispensers at Crap I've Made I decided to try and make some cute little jack-o-lanterns out of the larger wood scraps. I love it when an idea actually turns out-- 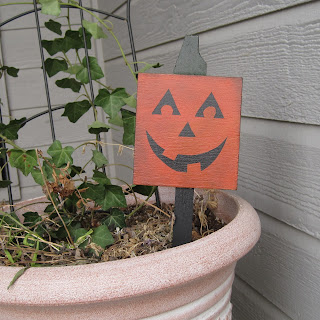 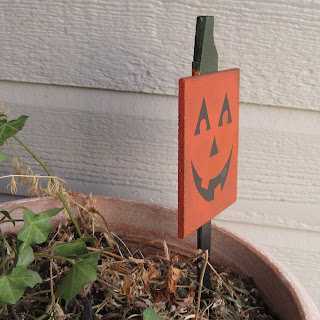 Don't the dead plants in the pot make it look extra spooky? I painted it with Ceramcoat Georgia Clay (the best pumpkin color if you don't want obnoxious bright orange) and sanded and inked the edges with Tim Holtz walnut ink. I made the face using a freezer paper stencil. I found several templates online. I was hoping freezer paper stencils would work on wood, and it did. I used black craft paint for the face on this one, but I also used spray paint on some. Don't use too much paint or the freezer paper will start to lift up and paint will leak under the stencil. The freezer paper did leave a little waxy stuff in some spots, but since I inked it you can't even tell. The stem and stake is a shim which my husband trimmed down the top to make it more stem-like. I painted the shim, glued it together, sprayed it with sealer, and my Halloween decorating is complete! I even let Fred (my three-year-old son, not his real name) make one. His is obnoxious orange, and we used a craft stick for the stem and stake. I made the face stencil for him since he's not allowed to use an exacto knife or an iron, but he painted the face himself. His turned out pretty cute, too-- 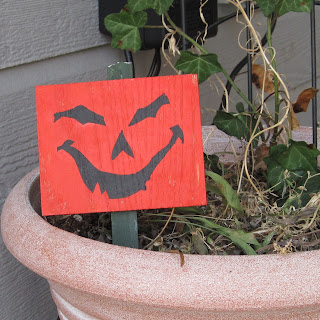 The best part is he had so much fun, he keeps asking me when we can do more craft projects. I love it!