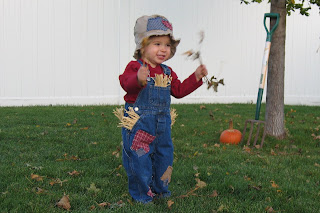 So I finally completed one Halloween costume. I made my son a scarecrow costume to wear to daycare because I was worried something might happen to the Elmo costume I was making for trick-or-treating. It was supposed to be a simple costume, but I turn everything into a major production. I bought a pair of denim overalls at Goodwill and sewed on some patches of homespun fabric. I put raffia in all the pockets-- 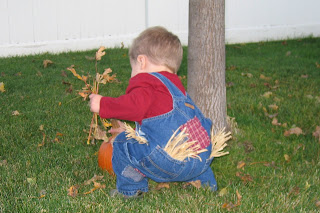 I made this cute little hat to complete the outfit. He's not a huge fan of wearing hats, so I don't know that he'll actually keep it on. 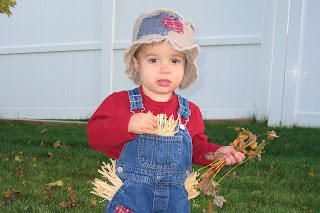 I puchased a shirt at Target, but I didn't sew anything to it because I had to pay full price. And I never pay full price. He'll have it wear it after Halloween, too. I think he looks pretty cute, but I'm biased!